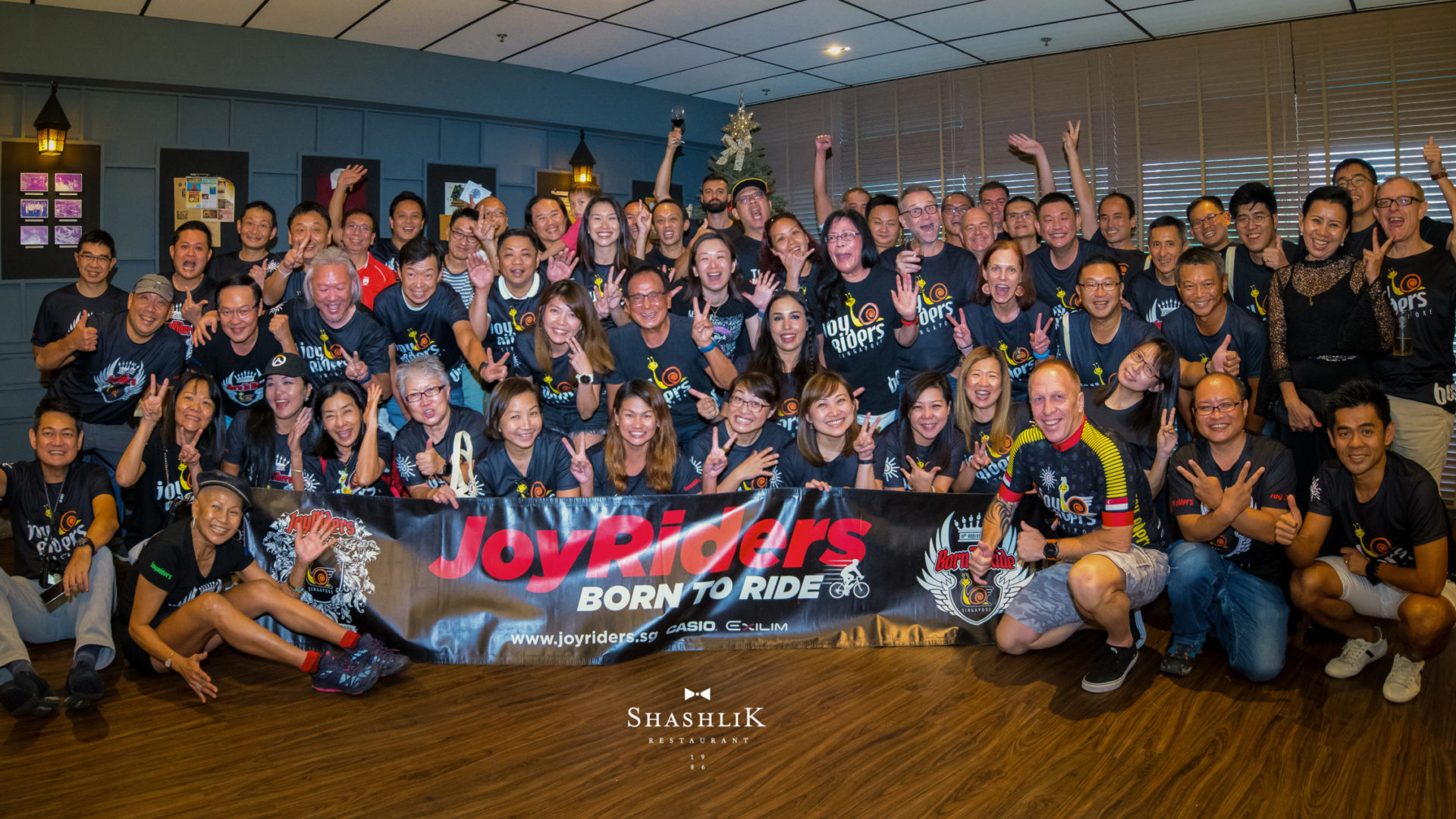 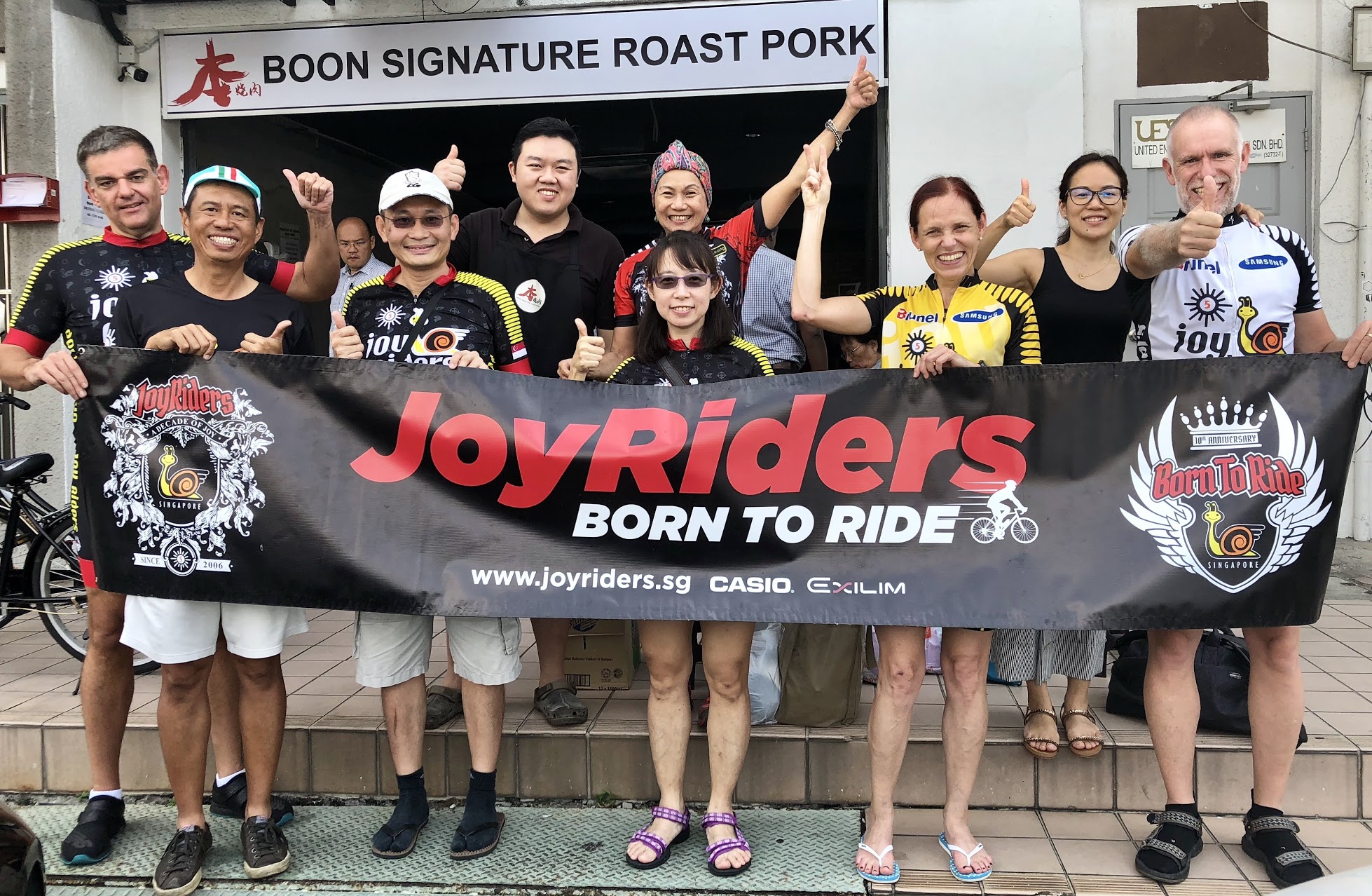 This trip was meant to be a special trip, a farewell trip for a very nice guy, Keesjan and his wife Jing who are moving to Holland pretty soon. Joyce ‘s original idea was Fraser’s hill but she wanted to make it very special for KJ and designed a new route into the unknown. It started at a new lunch place of delicious roasted pork (so crispy 😋). Ok, the ride of the first day was not new, actualy it was the same ride from Gombak
to Bentong including the famous ice cream place (yummy ice kacan).
Definitely new was the place to stay, we had a complete house for us, the luxury of single rooms – ok the couples had to share 😉 – and what surprise, each room had windows. But we paid for this luxury with common bathrooms. 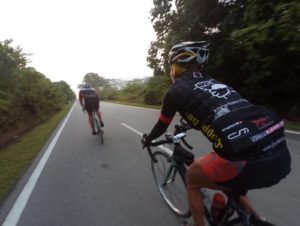 The second day started with perfect timing, still in the city center of Bentong we saw plenty of runners waiting for the start gun and I heard an announcement, 1 minute to go. Luckily we were faster and there was no need to share the road with them 😊. The ride was completely different, not a big hill like Fraser, no it were nice rolling hills, a bit up and then the reward and up again and …. The scenery was fantastic, no potholes, hardly any traffic, the weather was perfect and not hot in the morning. In the unknown Joyce’s new way of guiding us was extremely helpful. No, it was not about shouting or a special fancy electronic device, it was just a sheet of paper cut in a way that it could be mounted on the handle bar with the most important informations 7/R, 14/L … it worked better than google maps, we were really surprised😯. Ahja and then there was all of a sudden quite a long steep hill for which we were mentally not prepared. The morning ride finished after about 125km at a river. Warm up done 😉. After having a light lunch we took a nice but short boat ride to the other side of the river. There the 130 million years old tropical rain forest started. Most of us did the 50k afternoon ride which was still good to ride as long as there were trees, the last 10k we suffered under the hot afternoon sun rolling up and down without any shadow until we reached the Han rainforest lodge in Taman Negara.

In order to be prepared for the last day we went on a Jeep to recki the special hills for KJ. The scenery was even better and we enjoyed the nice breeze and perfect light before sunset. However it was difficult to imagine that we could ride here the next morning, many 10% signs and the hills were long. In order not to think too much about tomorrow we partied in the farewell’s couple room after listening to the famous farewell speech of KJ.

The next morning 4 of us decided to give those hills a try while for the rest Joyce organised alternative program, a canopy walk in the rainforest (they told it was nice). When I saw the hills in the evening I decided I will go only up to a certain junction but when reaching that point is was 8k only so I decided I will try more. Somehow the hills were challenging but managable. What did we learn there? 10% can vary a lot, sometimes it was pushing like hell and the next 10% were easy going. This time it was my second trip with Joyce and I was much more relaxed than the first time. Actually there was no complete newbe among us, the only ony who was more excited this time was Joyce, because everything was NEW. It started early Friday morning 😴, this time it was a coach, a 21 seater and I thought wow, plenty of space for all 9 of us. Surprisingly it was not as easy as loading bikes into a van and at the end no single seat remained empty. Finaly everything was safely stored, we started our journey into the new. Joyce relaxed until all of the sudden someone (let’s call him Mr. No Worries) came from the back asking “are we heading to the same lunch place as last time?”. Joyce: “No, I said everything is NEW this time.” The other person: “Oh, I have to go to that bike shop next to the lunch place because something is wrong with my tyres”. I don’t know how but she managed even that Mr. No Worries problem got solved.

What did I learn this time? When the bike is stored upside down the chain may have a knob afterwards. And when you walk with your shoes in the forest you get problems when you want to use your pedals, there might be too much dirt on the sole. I tried hard for a while getting in and finaly I managed but was unable to unclip. If KJ wouldn’t have helped me I think I would still stand there today trying getting off the pedals 🤔. Hence always remove the dirt 😁.

All in all a very pleasant trip, thank you Joyce for making it special, not only for KJ. I think it was special for all of us. And I enjoyed also the people who made it a very nice group ride, meeting very nice new people like the lovely Claudine, and Phillip, I admire how well you did with your heavy bike, Alvin riding partially extremely strong on the hills and being always very supportive, Dirk besides pulling sometimes also providing special goods to the group 😉, KJ everybody could see how he enjoyed those days on the bike and he cared also about the weaker ones with his wonderful wife who supported us well from the coach and last but not least Bertram, he can entertain us completely unexpected (and I think not always intentionally) 😎

Luckily the weather was fine, we had no real accident and only 2 flats 😊.

Let’s do more exploring of the unknown. 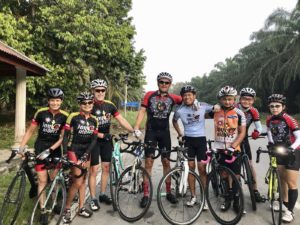