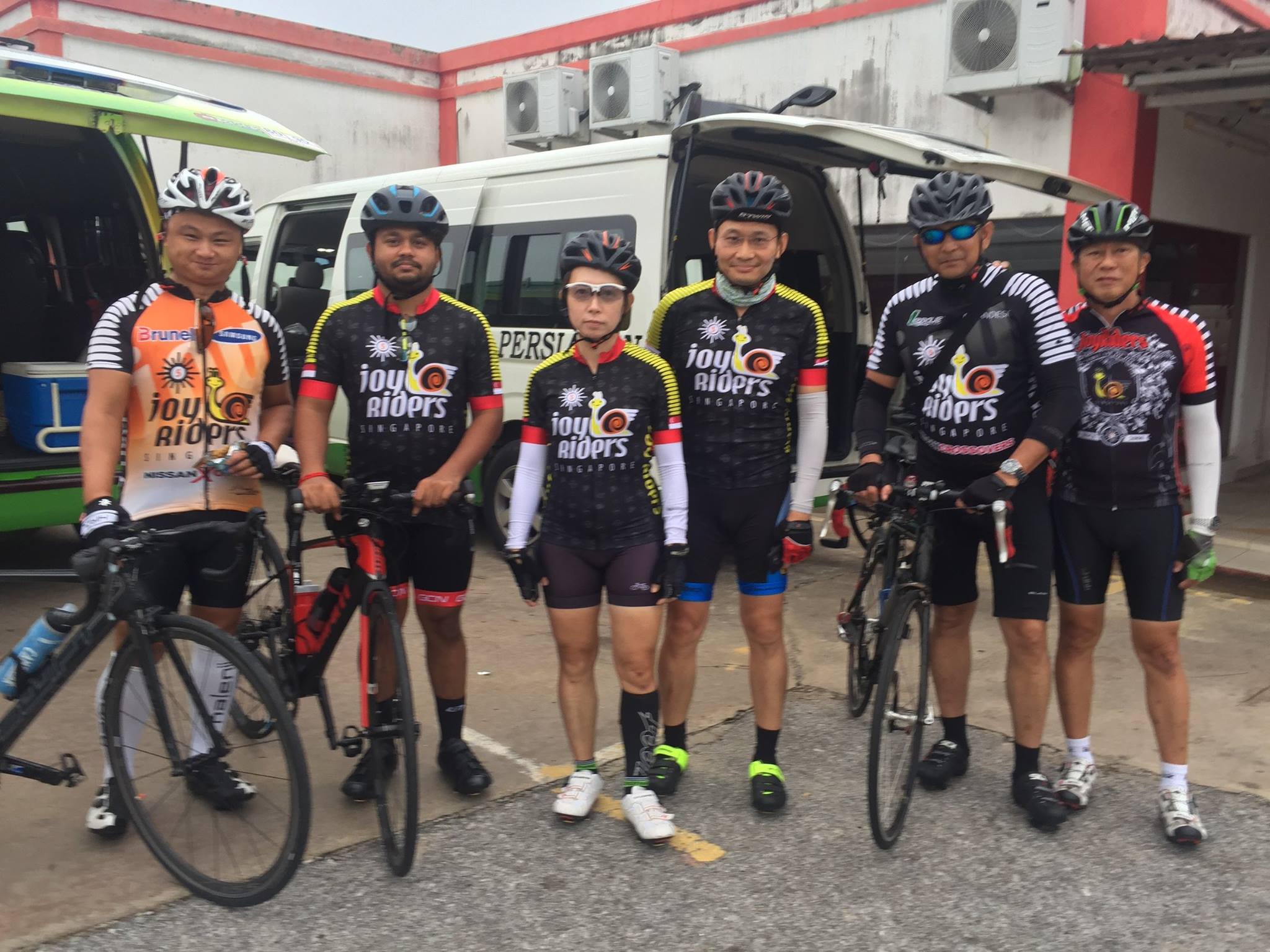 ‘I’m a bit worried I can’t climb’. This was one of the first thing I told Joyce when I agreed to go on the trip. The only things I have climbed so far were stairs and some miniscule slopes which pale in comparison to those on Cameron. ‘Don’t worry. You have to start somewhere,’ was her reply. True that. However, I did question my sanity in signing up for the trip. But YOLO, right? Having just returned to riding in May this year after a break of 20 years, I only started rides with Joyriders in August so with just two months of group rides, you can imagine my apprehension. 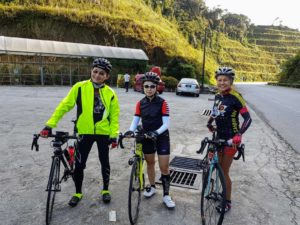 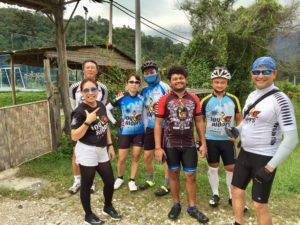 Due to a delay in traffic, we reached our starting point up in Cameron rather late. It was my first climbing experience on gradual winding road going up, up, up and away! The climbs, gentle as they are, took me by surprise. It was nothing like anything I have experienced riding back home. My body, legs, bike and butt (haha) acutely felt the pull of gravity weighing me down on each climb. Even roads that looked deceptively flat were actually gradual climbs that I was not accustomed to. Welcome to a new kind of suffering! Coupled with the cold climate as the evening approached, I barely made it up to 15km (out of the estimated 25km) before my left calf was wracked with cramps. I returned to the apartment slightly demoralized and thinking I was insane to have come. But there were unforgettable moments such as the golden sunset above the hills that took my breath away. This was what I came for and yes, it was beautiful. 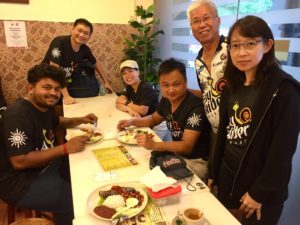 Armed with plenty of good advice from more experienced riders on cadence, gear changing and how to approach climbs, I downed a salt tablet, put on a calf sleeve on my left leg and was ready to give the hills (92km) another try. We waited for a good 50 minutes in the vans for our final rider, Bertram, to arrive. There were reports that there were strange sounds coming from his room, of cupboard doors being banged and the sounds of something tinkering with bicycle parts into the early hours of the morning, all of which were denied. Was he sleepwalking? Did the sounds come from another apartment? Well, what really happened that night, we will never know. *cue twilight zone music* I had it on good word that one of our van drivers pounded on his door mafia style growling, ‘Oi! You don’t want to cycle ah?!’ Bertram and his bicycle were forcibly removed from his room and unceremoniously stuffed into the van (OK. I confess. I’m exaggerating here.) But all’s good because there was some free beer for both vans, compliments of Bertram at the dinner later. Asahi beer, anyone? We still love you Bertram (I think)! Ah but I digress. Back to the ride which I did with Philip and Benjamin mainly as the rest of the Van 2 riders (Henry, Sandeep, Joyce, Bertram) had shot ahead based on their individual pace. The second day was an improvement from the first. We knew what we were facing. The first couple of kilometres on rolling flats was a good warm up and gave us the chance to maintain a better cadence and momentum to do some gentle climbs, though I admit, I was still huffing and a-puffing up most of the steeper climbs, slowing to an insufferable crawl at times, where I would just stare at the road in front of my wheel, doggedly counting ‘1,2,1,2..’ till I made it to the top. Barely. The hills reverberated with sounds of my ‘OH MY GOD!!!’ at least twice whenever a steep climb loomed ahead. I promise not to traumatise wildlife (and fellow cyclists) this way again on my next trip. We managed to cover almost 40km before stumbling into the van for some relief before trying the last 10km to reach the end point at Ringlet. That last climb just before Ringlet, I’ll never forget. Thinking it was just a straight slope upwards, we snailed to the top only to find that the climb continued winding up to the left. Nooooo! But stopping mid-climb would mean it would be hard to start again so we pressed on sure that we would just collapse and possibly die any moment. Hahaha. But we found ourselves at the top and staggered soon into Ming’s good company at the van at Ringlet. But the ride was worth it. There were times when I would gasp at the sight of the tops of misty green hills on the left, take in the cool air and just enjoy the solitude. I was hooked. 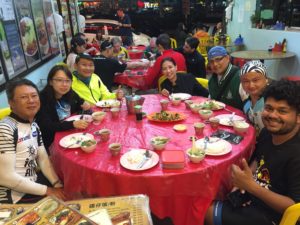 This was the day I was going to make the descent. Once again, butterflies in my stomach as I prepared the gear for the day, not knowing what to expect. We took a couple of group pictures and flagged off the guys from Van 1 who would descend from the top. Going down in the van to Meiko which was the newbie start point, I was glad I did not descend from the top. There were some climbs with steep gradients. Had I started from the top, no one would make it back in time for work on Monday morning. There was also a newfound respect for the veteran riders in the group who powered through the rides on all days. There were three of us from Van 2 leaving from Meiko – Joyce, Philip (my hubby) and me. Descending from Meiko, the first 5 to 10km was a tad scary, not to mention cold, even though I had a wind vest and arm sleeves on. The road was riddled with lots of loose gravel, some potholes and patches of really rough road surfaces that were bone rattling. What I learnt from this descent was that it required an intense focus. While I was speeding down, I was constantly scanning and estimating the distance ahead while checking the road conditions in front of me, gripping my handlebars till my arms and hands ached from sheer nervousness and at the same time, feathering the brakes to adjust the speed especially while I was cornering bends. I was very tense for the first 20km or so, with the memory of my fall on Loyang Road in September fresh in my mind. I was determined not to fall again. Not with vehicles whizzing past me every now and then at top speed. But as soon as my bike and I grew accustomed to the road, I started to relax a little and enjoy the ride. It was pure exhilaration whizzing down long stretches! It’s not something I’ll get to do back home much! Riding past forests, bridges, waterfalls and streams. Lovely! Almost made it to the end point with 52.5km done but cut short the ride when I was told that Philip had a fall further up and needed to be taken to a clinic for first aid. This incident highlighted two things. Firstly, a helmet is a must. Philip’s helmet was damaged on one side. Without the helmet, his head would have received the direct impact of the fall. Secondly, don’t skimp on insurance. Get one with emergency evacuation if you can afford it. Grateful to the riders in Van 2 (Henry, Benjamin, Eleonor, Sandeep) who sprang out to help Philip when he fell and to the rest of the group who showed care and concern in various ways. Feeling the love being part of this cycling family. You’re an awesome bunch!
So, was I crazy to have signed up for the trip? Possibly yes. Did I regret going? A big resounding NO. It was a real eye-opener for me and I’m stoked! It was excellent training. I may have just done rides on segments of the original distance planned but it is the journey that counts and as a newbie, I think it was the best I could do at this point in time. I want more. I encourage everyone who wants to take their training to a higher level or seek improvement in bike handling skills or endurance building to come join one of these trips or more. If nothing else, come for the scenery, food and the fellowship! I enjoyed a lovely steamboat dinner at Uncle Paul’s restaurant and tender smoked duck at Jasmine’s Café as well as the amazing spread of dishes on the first night. Nothing beats tucking into good food after a crazy day of cycling.

And oh, talking about food, I owe a Frenchman out there a meal as I had distractedly and mistakenly wolfed down his lunch order on Sunday so let me offer a true blue Singaporean apology – ‘Paiseh. Sorlee. Next beer’s on me!’